The NNTC is working on a national compensation framework. This is a coordinated approach to enabling the negotiation of native title compensation settlements by resolving a number of outstanding issues.

What is native title compensation?

Under the Native Title Act 1993 (NTA), native title holders can make applications to the Federal Court seeking compensation for loss, diminution or impairment of their native title. The NTA is, however, vague as to how native title compensation should be valued. Griffiths v Northern Territory [2019] (Griffiths) was the High Court’s first decision in relation to compensation, providing some direction as to how compensation can be valued. Specifically, the High Court provided direction on calculations for economic loss within a township, calculation of simple interest on that compensation from the point of extinguishment, and also provided a separate category and test for cultural loss.  However, the judgement in Griffiths does not apply to many types of potential native title compensation claims and leaves unanswered a number of significant questions.

There is agreement among stakeholders that negotiated compensation settlements are preferable to litigated outcomes. Negotiated outcomes ensure that resources are not wasted on litigation and instead focusses resources on agreements critical for securing economic development, independence and positive social outcomes for Indigenous people. It is well accepted that such outcomes benefit Australian society economically has a whole, with increased Indigenous economic participation.

However, to negotiate settlement agreements both native title parties and government parties need to feel assured that they are making the best deal possible. To do that, there are still a number of issues that need to be resolved by the courts that will assist determine the amount of compensation payable in particular circumstances.

The NNTC is supporting the resolution of these issues. Our National Compensation Strategy is supported by the members of the NNTC and has broad support from stakeholders. The Strategy is a multifaceted approach that includes the following. 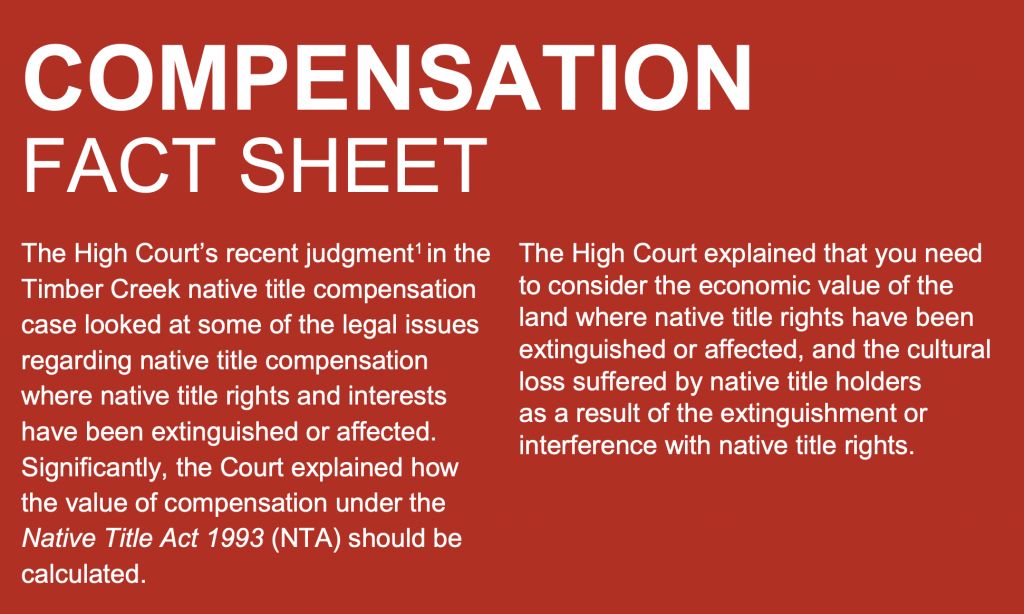 The Native Title Act was passed by the Commonwealth Parliament in 1993 following intensive political negotiations that took place after the historic Mabo decision of the High Court. In Mabo the High Court held that Australian law recognises the continuing traditional legal rights and interests of Aboriginal and Torres Strait Islanders in the lands and waters of Australia, and it referred to these as native title rights.

The objectives of the Native Title Act were to recognise and protect native title, and it achieved this in several ways including by:

Amendments to the Native Title Act

The Native Title Act is complex legislation and it has been necessary to amend it on several occasions over the years. During this time the NNTC has worked with its member native title organisations to strengthen and improve the operation of the Native Title Act and has negotiated amendments with the Commonwealth Attorney-General’s Department and other stakeholders.

Most recently, in October 2019 a revised Native Title Legislation Amendment Bill was introduced into the Commonwealth Parliament.  This Bill was subsequently referred to the Legal and Constitutional Affairs Legislation Committee to conduct an inquiry and undertake consultations about the changes proposed in the Bill.

The NNTC made a written submission to the Committee in which it supported the many positive amendments proposed by the Bill and reiterated its concerns about a small number of amendments that it does not consider appropriate.  The Committee is currently considering the submissions that have been made and is expected to report the outcome of its inquiry to Parliament by 19 August 2020.

The CATSI Act was passed by the Commonwealth Parliament in 2006.  It reflects many of the governance requirements for corporations set out in the Corporations Act, while also providing more flexibility for Aboriginal and Torres Strait Islander corporations to develop governance structures and processes that are more appropriate for their particular circumstances.

The NNTC has worked with its members over several years to improve the CATSI Act, particularly as it relates to the unique role and functions of Prescribed Bodies Corporate (PBCs).  During this time the NNTC has had ongoing discussions with the Registrar of Indigenous Corporations about the operation of the Act and has made a number of submissions to Commonwealth Government inquiries and reviews into various aspects of the CATSI Act.

In December 2019 the Minister for Indigenous Australians announced the first comprehensive review of the CATSI Actsince the legislation came into operation. The review is being co-ordinated by the National Indigenous Australians Agency (NIAA).  It will review the Act more broadly than the reviews that have been undertaken in the past.

The current review will consider if the CATSI Act is fulfilling its purpose, including as a special measure under the Racial Discrimination Act.  Also, as the number of PBCs with their statutory functions under the Native Title Act has increased significantly over the past 20 years the review will look at the arrangements for PBCs under the CATSI Act,and how these could be improved.

The NIAA is conducting the review in two phases. The first phase was an online public consultation survey conducted at the beginning of 2020 in which the NIAA sought feedback on the issues members of the public considered were important for the review to consider.  The NIAA published its summary report of this survey in June 2020.

In the second phase of the review it is expected that NIAA will undertake consultations about amendments to the CATSI Act. The timetable for this second phase will be announced later in 2020.

The NNTC makes a number of submissions to parliament to support the rights and interests of Traditional Owners. The main legislative Acts we seek to influence and improve on their behalf are the Native Title Act 1993 (NTA), the Corporations (Aboriginal and Torres Strait Islander) Act 2006 (CATSI Act), and the Environment Protection and Biodiversity Conservation Act 1999 (the EPBC Act).

To view the NNTC’s past submissions to parliament, click here.